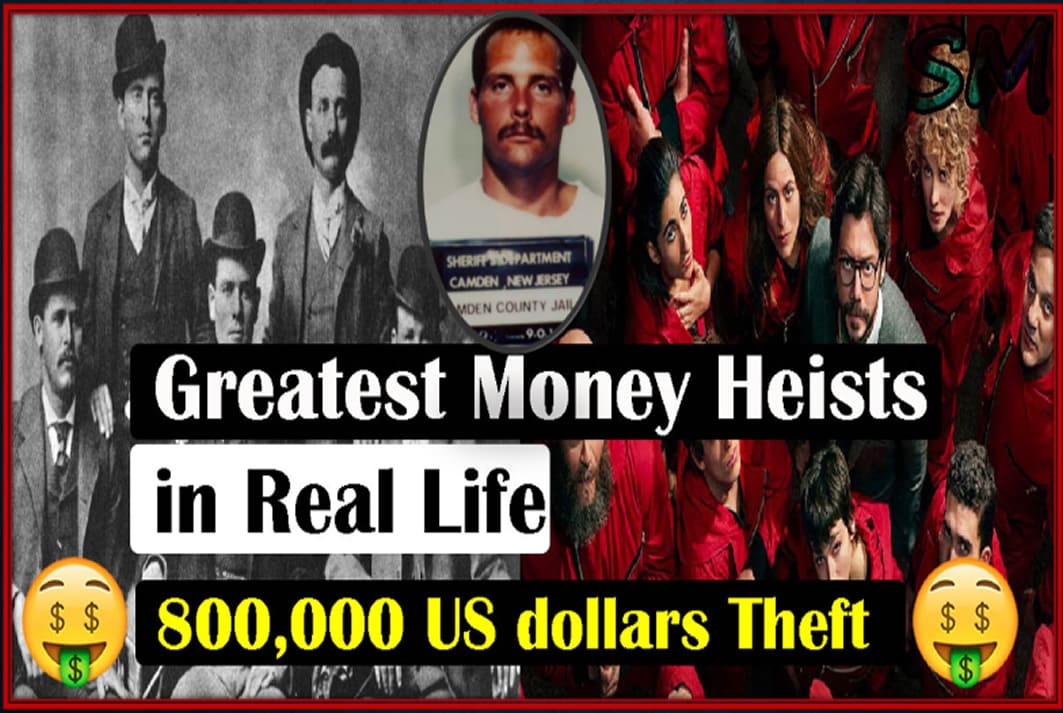 Have you ever watched the popular Netflix movie series named Money Heist?. If yes, have you ever think of having a real-life money heist that looks the same as the movie?

Ranking Facts got you covered as we will be talking you through 10 real-life money heist that has happened before. Without further ado, let’s begin.

10 Real-Life Money Heist That Has Happened Before:

Did you know a typical off-the-street criminal did not perpetrate the most massive real-life heist in history? In fact, in an audacious move, nearly $1bn was stolen from Iraq’s Central Bank by its very own dictator, Saddam Hussein. Anticipating that United State bombing would begin the very next day, the autocrat sent his son, Qusay to the bank with a handwritten note ordering that the money should be withdrawn.

Above all, United States troops later found approximately $650m in Saddam’s Opulent Palace. The rest of the money was never found. Even with Saddam’s execution and Qusay’s death in a firefight with US troops, the remaining $350m was still not located.

The second on the list is an incredible heist, where guards at the Dar Es Salaam Bank made off with more than a quarter-billion dollars. The break-in was a classic inside job according to officials, who said the guards must have had links with the militia to escape Baghdad without being stopped at a checkpoint.

Meanwhile, the heists which happens on July 11, 2007, caught the Dar Es Salaam Bank in Baghdad Managers on surprise as they are about to do the regular routine morning check on the vault. Surprisingly, it was discovered they have been robbed overnight.

In addition, The stolen money was in American dollars, not Iraqi dinars. Up till this moment, It was unclear why the bank had that much cash on hand in dollars, and how the robbers managed to move such a large amount without being detected.

The Knightsbridge Security Deposit heist happen on July 12 1987 in London. It was a plot of two men entering the Knightsbridge Safe Deposit Centre and requested to rent a safe deposit box. After being shown into the vault, they produced handguns and subdued the manager and security guards.

In addition, the thieves were able to cat away with $97 million from safety deposit boxes. However, investigations linked a bloody fingerprint to Valerio Vicceihe. To sum up, Valerio was later arrested and sentenced to 22 years in prison.

The Securitas Depot Heist makes the fourth on our list. As at the time it happens, it was one of the most famous heist. In fact, it was called the most massive cash heist in British history. It was masterminded by mixed martial arts fighter Lee Murray.

It took place on the night of February 21 through the early hours of February 22 2006. During the raid, Several men armed with AK47s abducted and tormented the family of the director, tied up fourteen staff members and stole cash value at over $83 million in banknotes.

Despite their clever disguises, some of the robbers were arrested. Similarly, the makeup artist who designed the masks worn during the heist became a crucial witness in the case.

Fifth on the list is the 2005 Banco Central Burglary in Fortaleza, Brazil. it is a heist that probably deserved its own movie just like Money Heist (Laca De Papel) as it was recognised by Guinness Book of World Records as the world’s greatest bank robbery. It was pulled off by a 25 member gang who set up a fake landscaping business just to pull this up.

To pull it up, the gang spent three months digging a 256-foot tunnel that led up through the bank’s vault floor. Once inside, they stole several containers that held 160 million Brazilian Real (worth $71.6 million in 2005) and broke through the reinforced concrete and evaded the security systems.

Thus far, officials have only been able to recover $3.8m of the notes stolen, and only eight people out of the 25 member gang have been arrested.

Sixth on the list is the 1983 Brink’s Mat Heist. It occurred at the Heathrow International Trading Estate where gold bullion, diamonds, and cash worth 41 million was stolen from a warehouse. After gaining entry to the warehouse from the security guard, they poured petrol over staff and threatened them with a lit match if they did not reveal the combination numbers of the vault.

To sum up, two men were convicted, and the majority of the gold has never been recovered. Several deaths have been linked to the case, and there are also links to the Hatton Garden safe deposit burglary in April 2015.

Moving to the next on the list is the Northern Bank Heist. This was a heist of cash from the Donegall Square West headquarters of Northern Bank in Belfast, Northern Ireland. It was carried out a week before Christmas in 2004. Thieves dressed as police officers and entered the homes of two of the major bank managers, their families were held hostage, and the managers were instructed to go to work, as usual, the next day.

When the workday ended, the managers allow the burglars into the bank. They stole about 26.5 million British pounds and new foreign currencies (undisclosed). It was the biggest bank robbery in Irish history. In conclusion, the case is still unsolved, and so far only one person involved in the robbery has been arrested, for money laundering.

To this day, the story behind the record-setting, mysterious bank heist that took place in Beirut decades ago still baffles all who study its impossible execution. The infamous heist of the 1976 British Bank of the Middle East is considered as one of the biggest bank heists in history and here’s why.

During the time Lebanon was in the midst of a civil war, a group of robbers decided to cash in on the confusion. The group used explosives to burst through the wall of a Catholic Church and enter the neighbouring British Bank of the Middle East. They brought with them professional locksmiths to crack open the vault.

As a result, the robbers made off with cash, gold bars, jewels and other valuables that were estimated to be within 20 to 50 million dollars. To sum up, none of the loot was recovered, and no one was arrested. Today, the stolen goods are worth more than three times their value in 1976.

Meanwhile, James Dinsio, the mastermind, is an expert in explosives and burglary, which obviously came in handy during the break and entry. The gang blasted the floor to the vault using a dynamite to gain entry.

According to records, seven of the eight men involved were arrested and later convicted. The getaway driver, Harry Barber, escaped. He settled in Pennsylvania before he was arrested in 1980 and was sentenced to 12 years in prison.

Last on our list is The Dunbar Armored Heist. This is the largest cash robbery to have happened in the United States. In 1997 five men robbed the Dunbar Armored facility in Los Angeles, California catting away with US$18.9 million.

The robbery was masterminded by Allen Pace, who worked for Dunbar as a regional safety inspector. While on the job, Pace had time to photograph and examine the company’s Los Angeles armoured car depot. To make the robbery a reality, He recruited five of his childhood friends to partake in the raid.

Eventually, Allen Pace was arrested and sentenced to 24 years in prison on April 23. He remains incarcerated at a Federal Correctional Institution in Safford. Less than half ($5 million) of the money was ever recovered, with some $13.9 million still unaccounted for.

We finally gave you 10 Real-Life Money Heist that has happened before. This article was inspired by the popular Netflix movie Money Heist (Laca De Papel) which was mastermind by the famous Spanish actor Alvaro Morte (El-Professor).

How do you think about this real-life heist? Will you like any of them to be used as a movie script? Do you feel there is still more sophisticated real-life heist money that wasn’t captured in our article? Kindly reach out to us in the comment section below.

Best and Toughest Police Academies in the United States – 2022 Rankings

The 20 Largest Police Departments in the US – 2022 Power Rankings